How to Find Immigration Law on Fastcase

The past weekend has seen many lawyers take a sudden and intense interest in immigration law. We here at Fastcase are happy to help!

Below is a list of public links to documents you may find useful in researching the recent travel ban, as well as a brief demonstration of how you might go about finding and sharing one of those documents on Fastcase.

As a reminder, members of the American Immigration Lawyers Association can access Fastcase for free through their AILA membership by going HERE, or by logging in to AILALink HERE. The AILA website also has a number of other publicly available resources that might be helpful, such as the full text of the executive order itself.

UPDATE: The full text of the new March 6th executive order can be found HERE.

Another great place to look is the UB Law Library’s recent blog post, which has a number of other resources related to the ban, including news and academic articles on the subject.

Nothing beats primary law, though, so here’s a list of black-letter cases and statutes that might help.

The 9th Circuit refused to grant a stay of the District Court’s order (immediately below). The order therefore remains effective, continuing to prevent enforcement of the ban nationwide.

This order temporarily blocks the United States government from sending people out of the country once they have landed in the country with valid visas, or if they arrive as part of the U.S. Refugee Admissions Program.

(a)(1)(A) – “…no person shall receive any preference or priority or be discriminated against in the issuance of an immigrant visa because of the person’s race, sex, nationality, place of birth, or place of residence.”

Summary judgement in favor of a former State Department officer. Officer claimed he was unlawfully terminated because he refused to follow an agency practice of discriminating on the basis of visa applicants’ race, ethnicity, and national origin.

The District Court has federal-question jurisdiction to hear respondents’ constitutional and statutory challenges to INS procedures.

District courts retain jurisdiction to confirm whether or not the procedures specified by INS are actually followed.

How to Find the Cases and Orders

These are very easy to find! Just enter the party names into the Quick Caselaw Search bar that appears when you first log in to Fastcase.

How to Find the Statutes 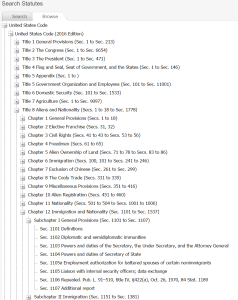 Statutes can sometimes be a bit harder to find, especially if you know the subject or the original name of the Act, but don’t know where it’s codified. Thankfully you can easily browse by subject on Fastcase, using the “Browse” button on the Statute Search page. If you’re using Fastcase 7, the method is a little bit different, and you can read about it HERE.

Finding a useful immigration case or statute is no good to anyone unless you can show it to someone else. We want to make it easier for people to get access to the law, so every one of our primary law documents has a Public Link. To share a link to a document on Fastcase, just right click on the Public Link in the top-right, and click “copy link”, then paste it into your Facebook post to show all your lawyer friends the on-point case you found!

There you have it! Next time you find yourself becoming an impromptu immigration attorney at the airport, you’ll be prepared!