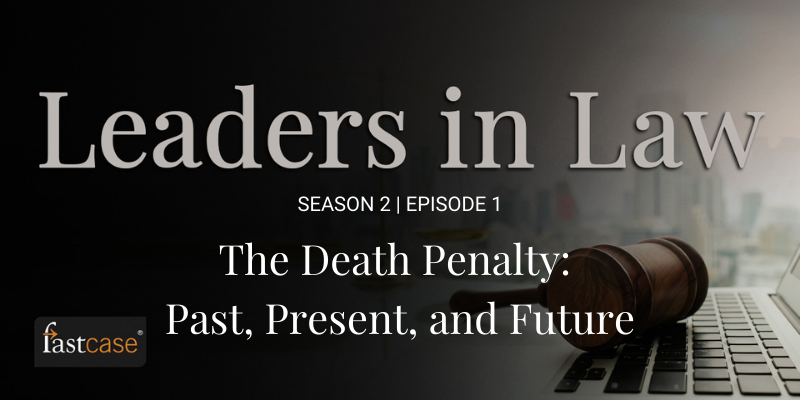 Free Webinar from Fastcase: The Death Penalty: Past, Present, and Future

Register now to save your seat for the upcoming Leaders in Law webinar. Join Fastcase for conversation regarding the history, present events, and future of the death penalty. This discussion, hosted by Judge Russell Canan of the Superior Court of the District of Columbia, features guests Ngozi Ndulue, the Senior Director of Research and Special Projects at the Death Penalty Information Center and Henderson Hill, Senior Staff Attorney of the Capital Punishment Project at the American Civil Liberties Union.

About The Honorable Russell F. Canan
Judge Russell F. Canan  practiced criminal defense and civil litigation in the District of Columbia, Maryland, and throughout the South. In1983, he helped establish the Southern Center for Human Rights in Atlanta, Georgia, where he represented prisoners on death row. Judge Canan was appointed to the Superior Court of the District of Columbia in 1993 by President Bill Clinton. Judge Canan is the former Presiding Judge of the Criminal Division and chaired a committee that studied wrongful convictions and proposed reforms.

Judge Canan is the author of Pursuing the Horizon: Stories of Justice (Twelve Tables Press), and a co-editor and co-author of Tough Cases: Judges Tell the Stories of Some of the Hardest Decisions They’ve Ever Made (Canan, Mize, Weisberg)(The New Press)

Judge Canan has been an instructor at the Harvard Law School Trial Advocacy Workshop, and has lectured throughout the country before such groups as the NAACP Legal Defense Fund, Amnesty International, and the American Bar Association.

About Ngozi Ndulue
Ngozi Ndulue is the Senior Director of Research and Special Projects at the Death Penalty Information Center.  Ngozi’s legal career has focused on the intersection of racial justice and the criminal legal system.

Ngozi’s current work focuses on deepening the public’s understanding of the origins, functioning, and impact of the death penalty.  At the Death Penalty Information Center, Ngozi conducts original research, supervises data collection and analysis, and leads strategic planning initiatives.  Ngozi is the lead author of DPIC’s September 2020 report, Enduring Injustice: The Persistence of Racial Discrimination in the U.S. Death Penalty.

About Henderson Hill
Henderson Hill joined the ACLU as. Senior Counsel after decades-long service as a public defender (PDS), director of the NC Death Penalty Resource Center [and its non-profit successor, the Center for Death Penalty Litigation], a partner at the civil rights law firm, Ferguson Stein Chambers (CLT), and as director of the Federal Defenders of Western North Carolina. Henderson served as founding director of the 8th Amendment Project. Henderson launched and continues to serve as co-director of RedressNC, an initiative to unwind extreme sentences through collaboration with community stakeholders.